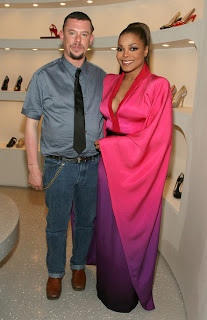 Alexander McQueen was a world renowned fashion designer recognized for his theatrical fashion shows, elaborate designs and going against the fashion grain. He was found dead in his home just outside London on Thursday February 11, 2010. His death has been confirmed as a suicide. He hanged himself.

It was just a week after the death of his mother and his family and friends were already grieving when faced with another devastating loss.

McQueen, was an influential designer who burst on fashion the scene in the mid-nineties after studying Fashion Design at St.Martins in London. By 1996 he became the head designer of Haute Couture at Givenchy. Over the course of his career he was decorated with numerous awards including International Designer of the Year by the Council of Fashion Designers of America in 2003. He earned British Designer of the year 4 times in 1996, 1997, 2001 and 2003.

Celebrities, models, socialites, artists are all shocked at the tragic death of an artistic genius. His passing is truly a loss in the world of fashion.