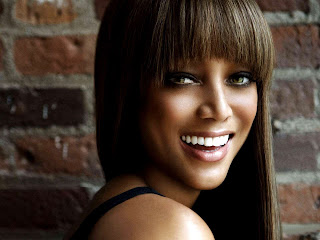 Tyra Banks recently signed a 1 year contract with IMG.  This comes as a surprise considering she's been saying she's retired from modelling for the last few years.

She also revealed that she signed a deal with Italian Vogue to feature the next winner of America's Next Top Model in the magazine.  This is a huge deal because it help ANTM gain a status of actually producing models that could be successful in the fashion industry.  Most contestants of the show are not seen after it all ends.  But there have been a select few who have been working regularly both in modelling and on television.

This link in Women's Wear Daily gives the scoop:
Banks on Banks... Mayor Weighs In at TechCrunch Conference... Rebel, Rebel... -

Fashion Memopad - WWD.com
Posted by Ivy Prosper at 9:19 AM

did tyra banks get her nose done?