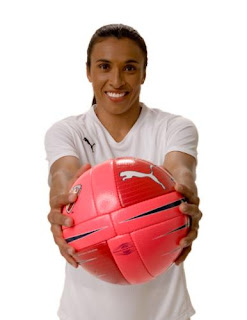 As we all know Breast Cancer is a deadly disease that affects millions of women worldwide each year.  Several companies have taken the initiative to raise funds in support of research and treatment for those affected by the disease.

When it comes to fashion we've seen everything from bracelets to handbags and t-shirts in support of the cause.  Footwear and sportswear giant  PUMA® announced today that they will be launching Project Pink to raise funds and awareness to fight this illness.  PUMA® will be dressing the most respected and best female soccer (football) players in the world with the special Project Pink brand for five Women's Professional Soccer (WPS) matches.  Karina LeBlanc, goalkeeper for the Philadelphia Independence, Amy Rodriguez also of the Independence and Leslie Osborne of the Boston Breakers will be spokeswomen for Project Pink.


There will be a full line of merchandise available through the summer until Breast cancer Awareness month in October.  Proceeds from product sales will be donated to a Breast Cancer charity that will be named after an online voting process.  This is PUMA's way of giving consumers a voice.  The online community can logon to wps.pumafootball.com/projectpink where you can vote for the charity you'd like to see get the 100% of the profits from sales.  Voting will be from August 7-September 13, 2010.