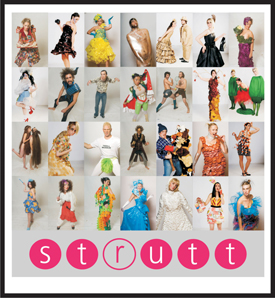 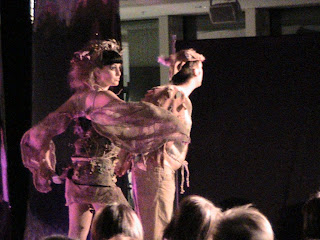 The 11th Annual Strutt Wearable Art show was another huge success.  Artists, designers and models came together to raise funds for the Niagara Arts Centre.
This is Canada's largest wearable art show.  Paper, plastic, newspaper, coffee filters, kitchen sponges....you name it, they wore it on the runway.  Designers created some of the most interesting, wacky and creative works of art.  It was not only a runway show but also a performance.  Models became the characters of the clothing they wore.  Running around on stage, flirting, dancing, tossing things in the crowd and even 'schmoozin' with the panel of judges.  All the artists work were being judged by a panel and winners received cash prizes for their efforts.
See the video highlights of the event below.
Posted by Ivy Prosper at 10:05 PM

Fab! Wish I could witness this in person. Thanks for sharing.