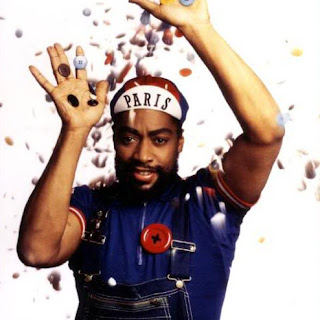 The late Patrick Kelly was an American-born fashion designer who's success came during the 1980's.  Raised in Mississippi, he moved to Atlanta as a young man and was selling used clothing until he went to New York to study fashion at Parson's School of Design.   In 1979 he relocated to the fashion capital; Paris.
He began by creating costumes for the La Palais, a popular nightclub at the time.  With his work gaining popularity, he soon launched his own label, the house of Patrick Kelly.  He produced his collections from 1985 until his sudden death on January 1, 1990.  At the time his death was said to be due to a brain tumor but it was later learned he died of complications from AIDS.  Unlike other famous design houses, nobody took over the label after his death and so the house of Patrick Kelly did not live on.
Kelly was the very first person of color and first American to become a member of the Chambre Syndicale du Prêt-à-Porter et des créateurs de Mode.  His clothing was sold in upscale retailers including Bergdorf Goodman and Bloomingdale's.    Kelly said he was influenced by the details he saw growing up that the women around him would add to their clothing.  He especially became captivated by the designs he saw in the magazines his grandmother used to bring home from the White homes she used to clean.  He was known for his use of wild colors, details like buttons, ribbons and contrasting trims. The designs were fun with a sense of whimsical charm that expressed his eccentric personality.  Kelly's clothing was worn by celebrities like Grace Jones and Bette Davis.
Although his legacy in fashion is largely unknown to the general public, he surely made a very big impact and opened the doors for designers of color gaining respect from the elite in fashion's capital. 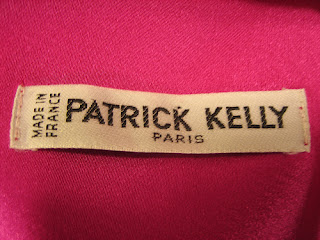 The book contains a foreword by Paul Gilroy, Introduction by Kate Pryor - Williams (Arts Council of England ) & Ammo Talwar MBE. Shot entirely in black and white on a Canon Sureshot camera purchased in the 1980’s, the photographs offer a stark alternative to the digital performance photography of today.

All books are signed, and are part of limited edition of 250. 190 Pages, A4 Paperback Monochrome, 95 Black and White plates.

The British Music Experience at O2 presented by the Co-operative, in association with OOM Gallery will be showcasing an exclusive exhibition of 38 rare photographs celebrating legendary black musicians working in the UK.

Using a simple camera photographer Pogus Caesar followed the musicians and singers around the famous venues producing a collection that celebrates a style of black music that brings together the UK, the US and the Caribbean.

From Stevie Wonder in 1989, Grace Jones in 2009 and Big Youth in 2011, this unique exhibition documents how black music, in its Reggae, Soul, Jazz and R&B tributaries of sound, has changed and renewed itself over the decades.

Journeying from Jimmy Cliff to Jay-Z via Mica Paris and Mary Wilson of The Supremes to David Bowie's bass player Gail Ann Dorsey, these images conjure up an alphabet of the music of the Black Atlantic.
The photographs selected from OOM Gallery Archive are also as much about the clubs and venues, as it is about the singers, producers and musicians. The Wailers at The Tower Ballroom, Sly Dunbar at The Hummingbird Club, Courtney Pine at Ronnie Scott's, Cameo at the Odeon Cinema, Ben E. King at the Hippodrome and Soul II Soul's Jazzie B at BBC Pebble Mill, many venues now lost to regeneration or renewal, and only recalled through memory and imagery.