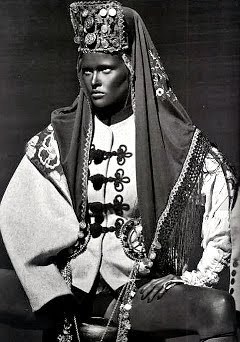 Just last week Harry Connick Jr., criticized an Australian television show for featuring white performers in 'black face' imitating the Jacksons. Now French Vogue is about to release an issue that features a white model in black face.
Why the editors felt this was in good taste is beyond me. Especially when they could have simply hired a Black model. There are so many who are scrambling for work in the industry and to choose to hire a white model only to 'make' her black is insane.

In the early 19th century it was quite common for Whites to appear in films and television as Black characters. With their faces painted black they depicted stereotypical images that are still seen as offensive today.

French Vogue has been known to print controversial images that invoke conversation and as a result increase sales. It's ironic that last year Italian Vogue featured and all Black issue promoting Black models and this year its like taking 2 steps back to paint a white girl black.

What are your thoughts? 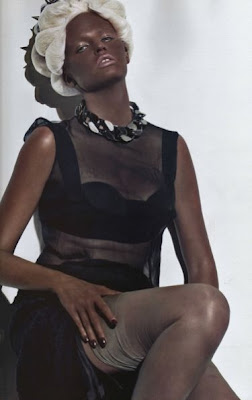 the politics of this one are a doozy but let's consider it all.

obviously, blackface is part of a painful legacy of hate and discrimination. So for Vogue to use these images as moderen day artistic license, is bull. they don't care. There is controversy and then there is insensitivity. there is nothing sexy or attractive about disrespect. And I feel disrespected.

I offer up that blackface/coonery and all manner of foolishness will never really be erased from black history. Black men and women are in an excessive time where our image is under so much pressure. three very largely successful black men were successful because they engaged audiences by dressing up as women (emasculating and we continue to find this acceptable). Unattractive ones at that.

Another perspective is that black images are not controlled by black people in the first place. And time and time again we are reminded by the gate keepers that main stream society will not hold council and confront the fetish we have with seeing things as they really are. Whether it be a stereotype or a politically incorrect blackface model. it all supports the bottom line that as a culture, we are not the one's in the drivers seat caring about our associated racialized issues. And even if we were it doesn't mean that we are going to be responsible about the politics associated with it.

lastly, I would like to say this is painstakingly a result of a number of problems that we are not having clear dialogue about. Like Michael Jackson's racialized career, like black Hollywood largely misrepresenting ourselves with inauthentic aesthetics for future generations to confuse and lament about.

More than anything, i would like to see some modern day black trailblazers who do not necessarily fit the status quo. Its been too long since someone who was just plain smart did something remarkable. and non-violent revolutions in the fashion industry are clearly doing nothing for us.

And all of this is still problematic when the bottom line is we participate in and consume a very large portion of trans-racial behavior. Whether it be relaxing our hair, or becoming President of the U.S.A. (which everyone saw as never happening before it actually happened), trans-racial identities are the ultimate excuse as to why some random socialite editor of Vogue decided this would be relatively ok...and who cares if Black women are offended...if we sell out like the other one (the all Black Vogue). In fact, this was probably just a "I'll put you in your place" strategy move and conspiracy to make black women feel self conscious about being black and beautiful and now clearly marginalized. Arrrghh!!!

Let me stop with my bamboozled conspiracy theory...

All I know is...its time to stop the foolishness. I have officially bought my last Vogue.

You are right when you say this is a reminder that Blacks don't have full control of the images out there. Thank you for your comments girl. Very well said.