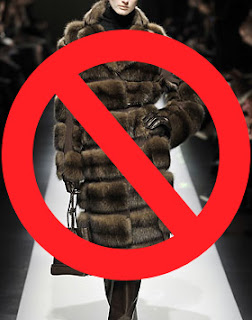 Norway has become the first country to ban fur during its bi-annual fashion week. Seems ironic that a country known for its cold climate would ban something utilized for keeping warm. But, fur is often more about fashion than it has been about function. Although all garments made using fur are prohibited from being shown during runway shows, designers are still allowed to create using it as part of their collections sold in stores.  It just won't be allowed to parade down the runway.

Oslo Fashion Week has set a standard that may or may not catch on with other countries. This is a bold move considering that this season the fashion industry embraced fur with top designers like Michael Kors, Marc Jacobs and Anna Sui showing fur in their fall/winter 2010/2011 collections.  Meanwhile, Karl Lagerfeld designed a collection for Chanel that was entirely faux fur.

Norwegian designer, Fam Irvoll, made her views known especially since she never works with fur in any of her designs.  Her influence along with a petition started by the Norwegian animal rights group NOAH was what pushed the decision.  Once the organizers of Oslo Fashion Week signed the petition, along with 200 other designers, models and photographers, the verdict was official.  The general manager of OFW said ""We are doing this in order to increase ethical values in fashion."

What are your thoughts?

Ivy for Style & Culture
Posted by Ivy Prosper at 12:27 PM