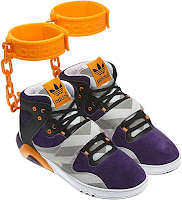 Since originally posting the story on the JS Roundhouse Mids by Adidas, they have decided to cancel the shoe.  This after a public outcry that these shoes were reminders of the history of slavery in America.  The sneakers were scheduled to hit stores in August and would have retailed for $350 USD.

The designer of the shoe is TO Jeremy Scott.  From Los Angeles, he says he was inspired by the 1980's children's toy My Pet Monster.

Reverend Jesse Jackson was a big critic of these shoes calling them "slave shoes."  He was quoted in the New York Times saying, "The attempt to commercialize and make popular more than 200 years of human degradation, where blacks were considered three-fifths human by our Constitution, is offensive, appalling and insensitive."

But was that the designer's intention?  Are these shoes really being racist?  Many say yes.  Some say no.  when I originally posted this story some of my friends made comments about how to them it looked like it was representative of being a "slave to fashion."  Another said it reminded her of "S&M".  One comment on Facebook said he saw it as "A representation of the debt we are enslaved to and can't get out of."  But then there were those who saw it as a reminder of slavery. Not just slavery of Black people but any people who have been enslaved throughout the world's history.

Whatever the thoughts, the backlash was too much for Adidas and the shoe is no longer going to be sold.